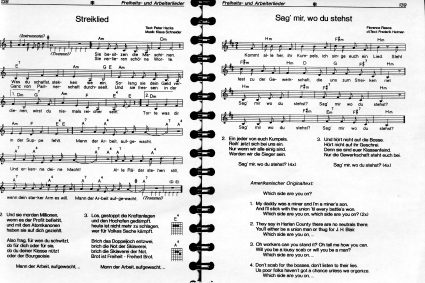 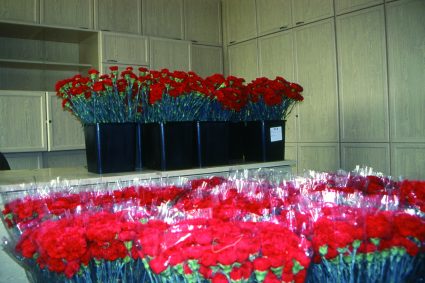 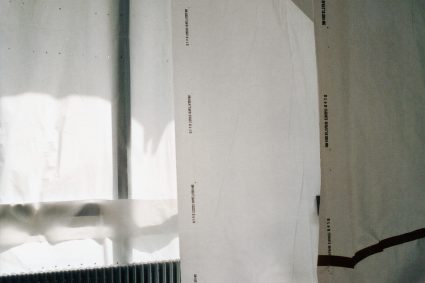 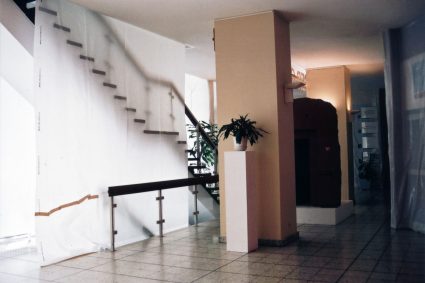 Socialist workers’ songs sound through speakers in the hallway of the trade unions´house in Berlin, that is wrapped in construction plastic tarp. For the opening, a choir performs the songs. Interviews with the choir singers about their contexts and thoughts on singing the songs get displayed in the hallway.

Questions to the choir:

1. What do you think of when singing socialists worker’s songs?

2. Have you been seized by fighting spirit while singing?

3. Have you been singing socialist worker’s songs since?

Name: Ruth
Age: 30
Job: Baker, mother
Place of residence: grown up in West Germany, made a home in Potsdam from 1994 to 2000, journeyed around as manual worker afterwards and currently getting settled in Würzburg

1.It seems that at the time these songs (especially the older ones and the more interesting and convincing ones to me) were written things were more clear-cut. There’s a line like: “Considering you’ll listen to guns, we’ll turn the guns towards to”. Towards whom would I turn the guns today? The difficulty to resist for me lies often already in the fact that I can’t really get a grip on my “opponent”. To be absolutely honest, I have to admit that regarding most wrongs in the world, I belong to the responsible party, so the guns would have to be turned in my face. And then I also notice that I don’t even want to fight by force of arms.

2. Am I gripped by fighting spirit? The songs remind me once again of the many things that should be fought. But the fighting spirit emanating from these songs feels historic to my. It hasn’t much to do with myself.

3. I thought about the songs many days after, and not only because I couldn’t get them out of my ear.

Name: Rita
Age: 30
Job: Set designer assistant
Place of residence: Berlin
1. I think of my years at school in the east, of my music teacher and my classmates. Together with the latter, I sometimes rephrased the texts or reinterpreted them in favour of “poor, oppressed” pupils like us. When singing the “International”, I’m always thinking of my fight with the teachers: for me as a daughter of Catholic parents it was a matter of honour to refuse singing the second verse: “No higher being is going to save us, nor god …” That needed a little courage, but it was also something like a game of sports among us non-pioneers. We all obediently sang the first and the third verse, since even Jesus was against oppression …

2. Yes, certainly,but that probably is in the nature of marsh melodies.

1. I’m thinking of historical changes – what certain people took a stance on, how the times change … how old demands for redistribution of wealth have changed, and how social antagonisms were discussed an fought about much more out in the open only eighty years ago … Of what was an everyday-type political position back then, of what was being discussed … And how much more powerful the social state of affairs were challenged on a fundamental level … the anger towards the conformist unions … how these songs helped the authoritarian state of East Germany to secure their identity and power – a context in which some of the people singing along came to know these songs …

2. It was fun – that’s probably a kind of fighting spirit. These melodies have a powerful and rousing quality … but some of the mire unpleasant chains of associations triggered by them and the militaristic sound to it keep to annoy … but because of the positive chains of associations, and because singing is a great way to spend your time, I went home in a good mood.

3. Nope … except for the “Resolution” occasionally, but that’s almost punk rock anyway…