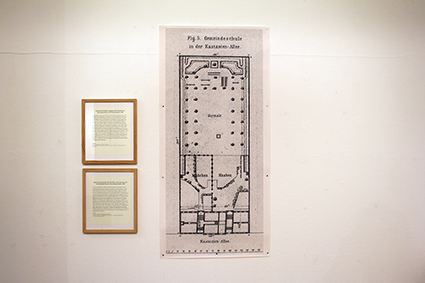 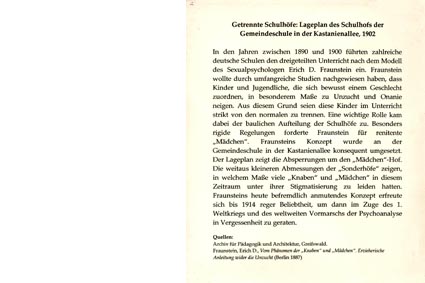 D 2004
Normals writes a subversive utopian history and presents a
choice of an alternative model of gender. The “Normals” in
this model are separated from the “boys” (“Knaben”) and
“girls” (“Mädchen”) by a fence. Through academic language,
complete with references, Normals plays with the credibility
of scientific research: if the language is appropriate, an
allegation becomes accepted as truth.

Accompanying text: Translation:
Normals
Separate Schoolyards: The Site Plan
of the Schoolyard of the
Municipal School in the Kastanienallee, 1902
In the years between 1890 and 1900, numerous German schools
implemented three-part instruction, based on the model of sexual
psychologist Erich D. Fraunstein. Fraunstein was supposed to have
proven through extensive studies that children and youth who
consciously allocate themselves to one gender tend to a notable degree
toward unchastity and onanism. For this reason, these children were to
be strictly separated from the normals during lessons. An important
role therein fell to the structural separation of the schoolyards.
Fraunstein stipulated particularly firm regulations for unruly “girls”.
Fraunstein’s concept was systematically implemented at the Municipal
School in the Kastanienallee. The site plan shows the barriers around
the “girls’” yard. The significantly smaller dimensions of the “special”
yards indicate to what extent many “boys” and “girls” in this era must
have suffered from their stigmatization. Fraunstein’s concept, while
appearing outlandish today, enjoyed a lively popularity until 1914,
after which, in the course of the First World War and the global
advance of psychological analysis, it became lost to memory.
Sources:
Archives for Education and Architecture, Greifswald
Fraunstein, Erich D., On the Phenomenon of “Boys” and “Girls”. An Educational
Instruction Manual to Prevent Unchastity (Berlin 1887)